Bread and wine with the neighbours

Bread and wine with the neighbours 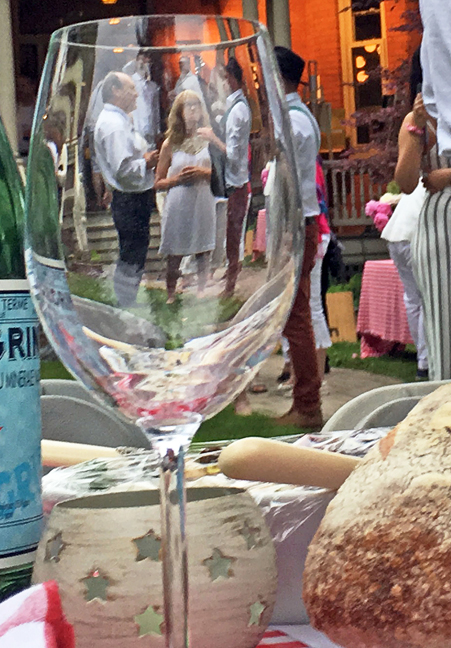 It was a long time ago and a ridiculous day.

I went for a sleepover. “Chris has invited you,” I was told by the grownups around me. So with my pyjamas and such, I walked some distance to my friend’s house. Chris wasn’t home, so I sat and waited. His sister looked at me like I was from Mars. I waited. And waited.

Finally, Chris came home with his mother. Neither knew a thing about any sleepover. Then that mother gave Chris supreme %$^&*. “Christopher! Have you been fooling around with that phone again?” she yelled. Nobody, least of all me, knew what was going on.

I later discovered it was another Chris who’d given me the kind invitation. Chris #1, my friend with the bug-eyed sister and yelling mother, was Chris Sylvestry. Chris #2 was Chris Polumbo, a neighbour living near me, wondering why I never arrived at his house. Good grief.

It’s a question for the ages, at least if you put any stock in that old exhortation that nothing in life, besides loving the Almighty, is as important as loving your neighbour. (You might know that Christ once said this, before some Philadelphia lawyer responded, “And who is my neighbour?”)

To the best of my observation, they’re fine people, as are the extended neighbours. Nobody’s invited me for a sleepover, but, one street over, the neighbours did recently invite the children and their mother and myself to their street party.

It was something: the music and wine, the worthwhile conversation, along with the food on table after table lining the asphalted street. And kids and scooters and dogs. And all that white – you were to wear at least some – like you were at Wimbledon or something.

It was the 8th year for this party, a fundraiser to fight pancreatic cancer. In 2010, this took the life of Jane Lindsay. With her husband, George, she had lived in the Dundas neighbourhood since 2003. To date, in Jane’s memory, about $85,000 has been raised. I can’t imagine a better reason for a summer gathering.

And it’s this party that’s led me to pause and consider it all: friends and neighbours and, sure, the ridiculous day I confused them. It’s reminded me of the power of eating together. The power of breaking bread and sharing wine. That’s why it’s called communion, I suppose. Because when you share such elemental things, community is created.

In our hurried time we live with less of this. We have fewer conversations and more noise. Fewer front porches. People are especially hungry, so to speak, for this sort of nourishment. Other parts of the world, from what I’ve seen, are better at it.

The research is also clear. Slow down and eat with others. Regularly. Intentionally. At a table. (Or on a mat-covered floor, as some cultures will, inviting you in. “Thooo-masss! Come! Eat!”)

Joining in helps your emotional and intellectual and spiritual well-being. Studies show this is true especially for the kids. Eating together – creating space to share stories – gives kids better self-esteem, higher grades and fewer struggles with depression and substance abuse.

And while it’s one thing to sit and eat with family or friends or neighbours, what about sharing some bread and Pinot Noir with some enemy, some traitor in your life? There has to be power in this sort of gesture also.

It’s good to ruminate on, especially now for my own family, as one year ago today I shared  in this space how we moved into a new home in this community, a home of some permanence, something different for us, a home that came along in an unusual and unexpected way.

This too is giving these summer days a certain sweet taste.