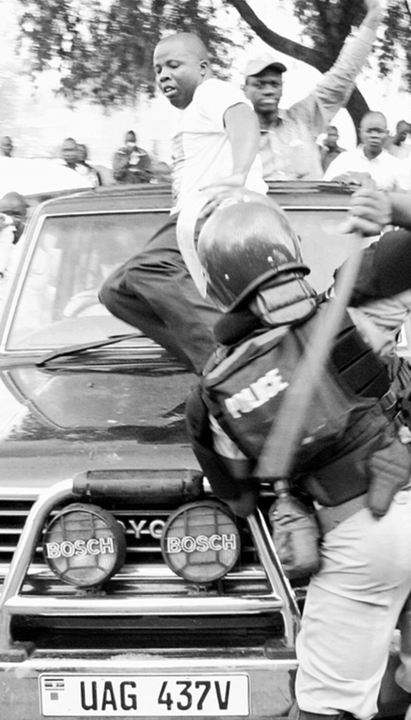 Police club a supporter of Colonel Kizza Besigye, leader of Uganda’s opposition party, in this photo taken prior to a Ugandan election, a photo contrasting the choice and freedom when voting in a place like Ontario. (James Akena photo)

It was the other day, an ordinary day, a Saturday, when I voted. It was something. Really something.

From my front door I walked to my advance polling station. Nobody harassed me on the way. I was met with kind greetings and smiles. Nobody had a gun. I didn’t even have my voter’s card, but a single piece of ID showed that I was qualified and worthy to vote for a candidate of my own choosing. I did it. I marked my X.

I looked around at the people in that office. Nobody looked like they’d run off with any ballots. Or stuff ballot boxes. Or disqualify my vote for no good reason. Or lose (ha-ha) my ballot. It was like I’d won the lottery. The freedom. The choice.

I was dressed up. Had a formal jacket and leather shoes. I rarely do, especially on a warm spring day. But I’d just been at a men’s breakfast and had given the official “thank you” to the guest speaker, a local federal parliamentarian.

He talked about how to influence government. About consensus building and relationships. His spirit was full of service. He quoted Churchill: “The longer I live, the more I see God working in human affairs.” He asked people to pray for him, to pray for politicians in general. This too was something.

So, yes, thank you. Thank you Ontario. Such a fine day it was to dress up and vote, even while thinking about the rest of the world.

Democracy, if you didn’t know, is growing worldwide. About half of the world’s 7.6 billion people can now vote for their rulers. In the 1940s, just one in ten people had that freedom. Until the fall of communism, autocracy was the world’s leading political system.

Strange enough, several of these are western nations. The US is currently considered a flawed democracy. France and Italy, also. Further, a growing number of citizens in western nations, once democracy’s vanguards, don’t care much. There’s a shrug of the shoulder. This is what the global surveys show. We’re living in the big “meh.” And the danger of that.

Of course, no political system is perfect. People are, you know, so human. But while in a democracy the votes of the vicious and the stupid count, under any other system they might be running the show.

Yes, buffoonery and evil, when nobody is looking, can easily take the house. It’s Nazi Germany. It’s why 40 years after his bloody reign, Idi Amin is still mentioned by people asking me about my years in Uganda.

In Canada, by the way, Ontarians are the ones shrugging their shoulders. Since my own birth in 1965 to the last provincial vote in 2014, Ontario averaged 60 per cent voter turnout. That ranks a lowly ninth out of provinces and territories. Meh. Saskatchewan ranks highest, at 83 per cent. Quebec and the Maritime provinces, especially PEI, also rank high.

My son walked with me. He watched me vote. At one point he asked, “Do we still have responsible government?” The political term is from his school studies of Canada’s early parliament in Upper Canada. I laughed. “Some governments are more responsible than others.”

I suppose it’s a sense of connection that we want more than anything. To know that we’re not being ignored, that these people in office are in it for us, the electorate, not to build their own fiefdom. Their own kingdom.

We stopped for ice-cream. I told my son I hope he never forgets our travel experiences, what we’ve learned by getting out here and there. I hope I never forget. How could we?

But it’s true, for sure. The lottery. That’s what you’ve won if you’re reading this, if you’re living in Ontario. It’s something to think about.

Of course, you can always throw your winning ticket in the trash. Don’t be bothered by any of it. But that’s when the lunatics can take the asylum.