Thomas Froese met his wife, Jean Chamberlain, on Victoria Day, 2000. The introduction came through a singles network affectionately known as The Over-30 Unclaimed Precious Jewels Club.

Thomas had previously known of Dr. Jean only through a photo. On Victoria Day, when nobody else from the social group showed for a planned gathering, the pair found themselves on an unexpected first date with holiday fireworks.

Before long, Thomas was writing about Jean’s developing world experiences for his employer, the St. Thomas Times-Journal, and he began helping Jean publish her manuscript Where Have All the Mothers Gone?

After Jean left Canada to bring her skills as an obstetrician to the impoverished Arab nation of Yemen, Thomas visited with an airline ticket given by Jean’s friends. Shortly later, back in Canada, the couple got engaged on Valentine’s Day, 2001.

Thomas garnered the help of the local town crier, and a London, Ontario radio station that announced the news to 80,000 listeners. This, in addition to help from the Times-Journal, which, on its special edition front page, published a story about the couple’s upcoming ‘Royal Wedding.’

Their wedding date later did have an unplanned royal echo to it, falling on July 29, 2001,  20 years to the day after Prince Charles and the late Princess Diana wed.

In the wake of the terror attacks on Sept 11, 2001, and just before war erupted in Afghanistan and Iraq, the couple returned to Yemen in early 2002. The couple lived in a flat in the capital, Sana’a, on a street with no name. The first chapter in their family life soon included a daughter, Elizabeth Katherine.

While in Yemen, Dr. Jean worked with needy women in the field of maternal health, while Thomas worked as an editor and columnist at the Yemen Times, an independent English newspaper in Sana’a.

In 2005, now with a second child, Jonathan Thomas, the family moved to the East African nation of Uganda. Based at Uganda Christian University in Mukono, Uganda, this is where Jean began her work as the founding director of the Canadian-Ugandan charity Save the Mothers.

This dedication to mothers and children in East Africa would eventually lead to Dr. Jean being awarded the Order of Canada.

More of Hannah can be found in this piece about Ugandan adoptions, and in this column on Hannah and her Canadian citizenship. Hannah has an especially meaningful place in the family because she is the namesake of Hannelore (pronounced Hannah Laura), the late mother of Thomas, who he has written about, including here.

Thomas has written often about Jean, including this 2016 anniversary wish in the Hamilton Spectator.

While the family lived in Uganda’s capital district of Kampala from 2005 to 2017, returning annually to Canada, now, since 2017 the family makes Hamilton, Canada their full-time home and travels the opposite direction, to Uganda, for work and to keep the children connected to their African roots.

A Postscript on Family and Journalism

While the story of Thomas and Jean and their family has found its way to various newspapers, so has the story of the Froese family of a generation ago.

Thomas was born in what was at the time West Berlin, when the former Toronto Telegram chronicled the saga of the custody battle that involved the Froese Family.

“One man’s fight for his two children” was the page one headline that the Telegram wrote of how courts and politicos in Ottawa and Berlin helped determine who would get custody of Thomas and his sister Heidi — his father, Guenther, or his mother, Hannelore.

Eventually, with a military police escort to the Berlin airport for his safety, and the backdrop of Cold War politics behind him, Guenther had custody of both children and a new life for the three of them in Canada.

Thomas would grow up in the Niagara Region, near the honeymoon capital of Niagara Falls. There he helped in the family business, a private home for the less fortunate, owned and managed by his father.

After studying journalism in nearby Kitchener, Ontario, his first newspaper job was at the Times-Journal, in St. Thomas, on the north shore of Lake Erie. There Thomas developed skills he’d later use overseas.

In a coming-full-circle, Thomas had found himself employed not only by the Times-Journal, but by its owners, Sun Media, the newspaper chain that was birthed out of the ashes of the former Toronto Telegram, the newspaper that had told his own early story. 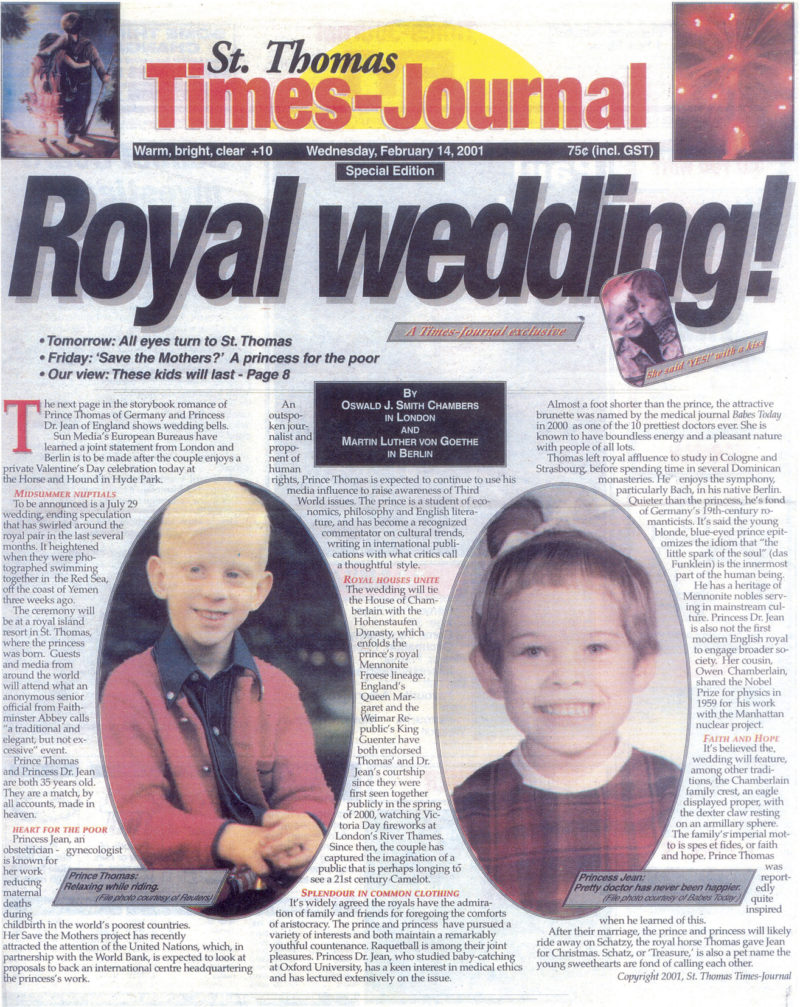