Filling the house with the food of love

Filling the house with the food of love 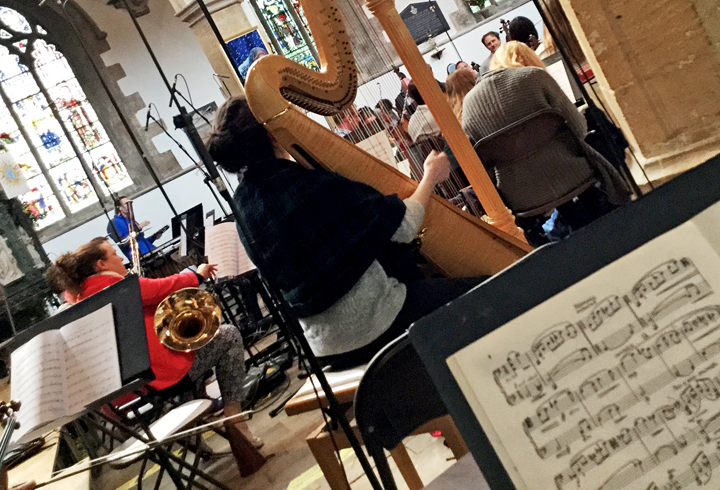 Musicians practice at the Church of the Holy Trinity in Stratford-upon-Avon, U.K.

I live in a house filled with instruments. And not just instruments, but music. And while this may not be the most dramatic news of the day, it’s the most reassuring news of my own day. I might live longer. I’ll certainly live happier. Science confirms the truth that we sense.

Take the Mozart effect, the psychoacoustic theory that suggests Mozart’s music (I personally enjoy Handel’s “Twelve Grand Concertos” while huffing and puffing on the cross-trainer) has certain benefits. It won’t lift your IQ, but such classical symphonies can give your body and mind a measurable boost in well-being, that sense of harmony with the world around you.

It’s something to think about because not only is today the 161st anniversary of the first performance of one of North America’s historic symphonies — the (former) New York Symphony Orchestra — but last Saturday was the 40th anniversary of the London premier of Peter Shaffer’s play, “Amadeus,” precursor of the Mozart movie of the same name that won all those Oscars.

Yes, we now have a music room. It’s a holy space. Once it was just a cold cement room under a back porch. Now it’s warmly renovated and has two keyboards and a drum kit and basic gear to produce songs and move the world, even in a small way, which Child Number One, our oldest girl, does with some dedication.

The music room has this sketch of Chopin, a gift from the children’s Opa, my father. Other decorations on the wall add to this sense of fellowship, like we’re all in this together, for better or worse. “Real music till the day we die,” reads one poster.

It’s the motto of rapper NF, a musical hero to Child Number Two, the boy, who led me over the border recently to see a concert and learn how black balloons and fake, pasty smiles and tipped shopping carts — all part of NF’s unusual, therapeutic vibe — can be holy too.

Up the stairs, here in our living room, is this old upright piano. It was gifted to the children’s mother by her grandfather forty-four years ago. We maintain it like an old car that’s too dear to let go. You may recall from previous writings that the children’s mother, my bride, once stood in her wedding dress at a different piano, playing for that wedding crowd a piece that she’d composed for me. Which is to say that she’s the one, really, who pulls the music together in our house.

Up more stairs, here in the room of our Ugandan girl, Child Number Three, is another keyboard, a gift from the children’s grandmother. This daughter also plays the flute. Next door, in the boy’s bedroom, is this old Ovation I purchased from a newsroom colleague long before the children were even born. The guitar sat mostly quiet for 20 years while it waited for the right hands, the boy’s hands as it turns out, to hold it and give it life. He also plays trombone.

African drums — I count nine brought from Uganda — also sit throughout our house. We don’t use them to call anyone for dinner, but they also remind us of it, this heritage of music, that it can come from one direction or another, and entire cultures can be better for it, just like entire families can be better.

And this is the point of all this. This is why my house matters. Because your house matters. Your instruments. Your music. Your new life in your renovated spaces. So that when the world’s storms and anxieties rage — and you know that they will — you have that harmony inside.

It reminds me of God’s house: you and me, bare as we are. It also reminds me of a certain church in Stratford-upon-Avon, the Church of the Holy Trinity. My family once visited. Shakespeare is buried there. On the day we dropped by, music practice was underway. One musical note followed another and filled the church’s towering, well-lit space. I listened.

Because good music, I’ve learned, is like good literature. It’s true. And as the good Bard himself once put it: “If music is the food of love, then play on.”