Finding Grace (and grace) in our lives

Finding Grace (and grace) in our lives 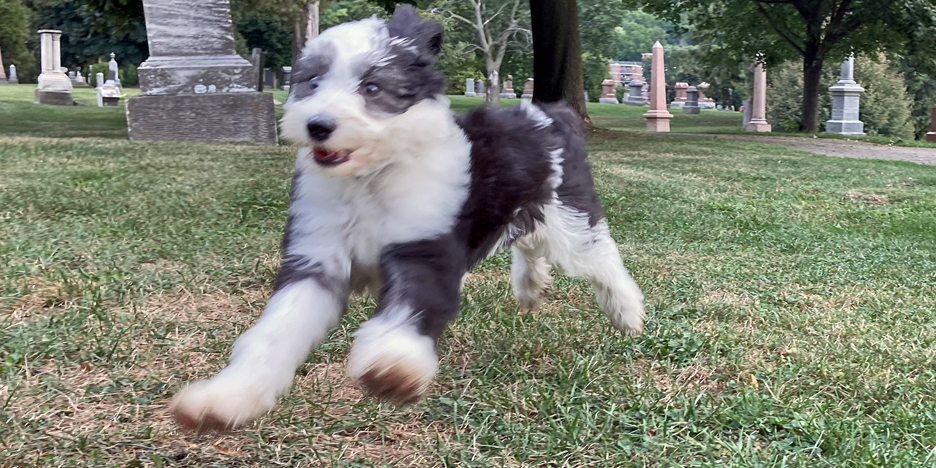 Grace, the Sheepadoodle, is a small dog with big feet who’s happiest when she’s running full-throttle, wild and wide-eyed, tripping over herself down some hill. She’s a dog who knows that life, even in dog years, is so short that there’s no time to waste, even if there’s no place to go and all day to get there.

Grace is also hopelessly happy when she sees you. She’s the most popular girl, as in “good girl,” at the local park where her friends, some who don’t even own a dog, give her dog treats. She otherwise eats little, but still has a healthy-sized gut. You might find her lying down, all fours and belly up, so you’ll rub it. She’s now 15 pounds, but she’ll double in size.

When she’s not running or having a belly rub, Grace likes to sleep, often on the floor vent, often twitching while dreaming the mysterious dreams of dogs. This is when I’m happiest, when she’s sleeping. Having a three-month-old dog around is like having a new child. But she’s easy on the eyes, Grace and her ample coat that resembles a panda bear’s as much as anything. So when Grace sleeps I watch without effort, thank God, and wonder about things, like, well, grace.

This is because grace, the word, is not unlike Grace, the dog. It’s a diminutive word with a certain largeness. It’s also an attractive word. Some words of this ilk have lost their shine over the years, maybe forgotten, or overused and threadbare and meaningless. Not so with grace.

Of course, grace can mean elegance and poise and deftness. (Gretzky played the game with memorable grace). But the finer essence of this word is much more consequential. It means you’re receiving undeserved favour from someone, most notably the Almighty, the emphasis on undeserved. (I need grace because I often miss the mark.)

Naturally, Grace is in our most recent family photo which now includes six. The children and their mother often call her Gracie, but we might otherwise be calling our new addition something like Bruno.

We had a long wait for Grace, so when her mother birthed a litter of nine, we had first pick. We narrowed it down to one male and one female. Then we said a prayer and flipped a coin. Grace won. So the name that I’d earlier suggested to everyone was confirmed. No, you can never have enough grace in your home.

Now, Grace is not a pandemic puppy, brought along to ease the loneliness in our time. Nor is Grace a rescue dog. But while she may not really rescue my family, she will give us a common, even transcending, purpose to attend. This, even as that other grace can transcend the differences that so easily divide families, not to mention the human family.

Of course, households everywhere are getting fuller these days. The pandemic is growing the already existing trend that’s seeing more people living communally, and more children at home, or returning home, later into their adult years.

There are reasons for this and I, for one, am not convinced that this so-called “failure to launch”  is because today’s youth are much different from yesterday’s. Granted, I left home young and learned resilience and other good things from all that. But that was then and this is now. And if my children have a different experience – our 17-year-old says she might live at home until the Second Coming – they’ll still have some worthwhile lessons to learn. One is grace.

Besides, in many places, in much of Europe and the Middle East and Asia, adult children have traditionally lived at home longer because of both economics and culture. Everyone simply gives a wider berth – there’s that grace – while still enjoying, hopefully, what can be the advantages of family under one roof.

Of course, there is such a thing as “cheap grace.” This term was popularized by theologian Dietrich Bonhoeffer. It involves trying to outmanoeuvre and take advantage of grace and its natural goodness. But it never works. Because the power of grace involves more mystery. I suspect that Grace the dog, who doesn’t read much Bonhoeffer, even knows this.

This is probably why she runs with such freedom.