Flying the plane of Daily Dadness

Flying the plane of Daily Dadness 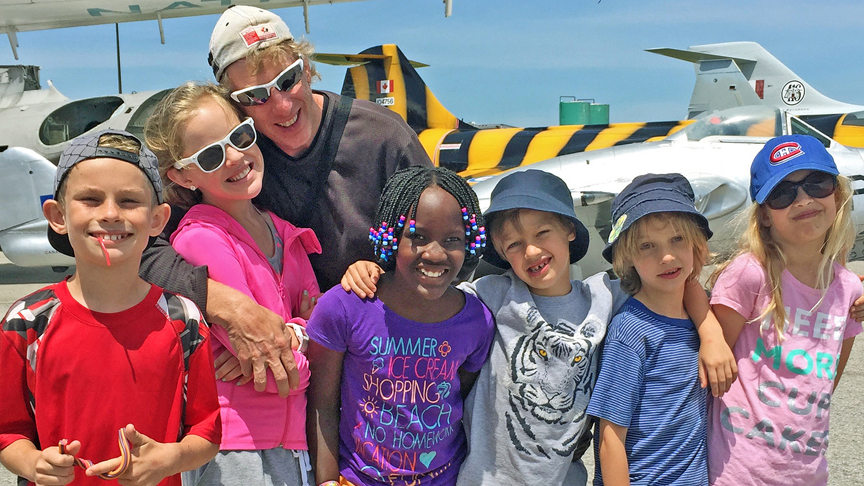 At the 2015 Hamilton Father’s Day Airshow, Thomas Froese with his children, from left, Jonathan, then 9, Liz, then 12, and Hannah, then 9, with their twin cousins Jack and Chris Mawson, 7, and Abby Mawson, 9.

Today’s news from the Daily Dad is that if you stick around this fatherhood business long enough, you’ll feel a bit inadequate, if not like some flying villain. But don’t let it get you down because it means that you’re in the game, so to speak, and maybe even its hero.

Okay, I don’t know if this is really true, but, hey, I’m a columnist, so truth (I mean, my truth, your truth, what’s really truth these days?) isn’t my biggest concern. This is how I see it, doctor. Yes, doctor, is this couch good to sit on? Oh, I can lay down on this couch? Really? Thank you, doctor. Oh, yes, this is much better.

As I was saying, doctor, lately, as a daily dad, as the Daily Dad, I’ve been feeling inadequate. “Dad,” I’m told, “you have to understand.” Then I’m informed of life’s nuances and appropriate behaviours, this often with a tilted head, as if to say, “Why is Dad so dull and hard to raise?”

This, you likely realize, comes from one or all of my beautiful children when I say something bizarre like, “When I was your age I rode my bike!” Then, “You rode your bike! Ahh, Dards!” Pardon me, doctor? How many? Yes, I have three kids. Excuse me? Gru also has three kids, you say? Gru? How about that Gru. My three are teenagers, pretty wise years if those are dog years, I guess.

I mean, doctor, when my kids were young travelers, we’d put them on a plane, or anywhere near a plane – I recall Hamilton’s Father’s Day Airshow a few years ago – and life was simpler. “Look, a plane!” And, now. Well. Pause. Okay. Okay! I’m sorry about all this. I really am. We both know you’re no doctor. You’re a newspaper reader. And thank God you’re a newspaper reader!

But seriously, while we’re on it, dear thoughtful newspaper reader, should we look at this Gru? Gru, that pot-bellied, spindly-legged, bald super-nasty who turned from flying villain to flying hero to, surprise, beloved father-hero when the animated film Despicable Me had its worldwide premier, in Moscow, 10 years ago this Father’s Day weekend.

Did I mention that I’m feeling a bit despicable myself these days? Well, not every second. It’s hard to peg fatherhood so clearly. You’re a hero one minute. Then, you know. Mothers at least have nine months to get tangibly close to the idea of it all. Fathers are just bystanders whistling Dixie before they’re thrown into the deep end.

This is why I’d run outside naked and put my head under a cold garden hose for hours every night. To be ready for the next day. I’d do this all the time. Okay, I did it once. Okay, maybe “once” is stretching it. But, sometimes, with my head on her lap, I do, in fact, tell my dear doctor about these remarkable thoughts. “There, there,” she says, rubbing my temples.

This is because this doctor is my beloved, a baby catcher who’s helped bring many lives – a couple of thousand – into our community. Yes, my children’s mother, an obstetrician otherwise known in this space as Babe, has seen not only many children brought into our world, she’s also seen a couple of thousand fathers get dunked into it.

Of course, it wasn’t long ago, just my own father’s generation, when fathers weren’t in delivery rooms. Now dads not only watch births, but, if mom can’t for some reason, then dad might offer that first skin-to-skin contact. Or he may be asked to hold a leg during delivery. Or, in all the drama, he might even faint, which my Babe still remembers watching at work some years ago. There goes the poor guy. Down, down, down. Crash. Out cold. It’s a hard floor.

It’s a hard job too, keeping the plane of fatherhood in the air. But as a dad with the chance for much of my career to work from home and close to my kids, I can’t really imagine anything less.

So to all the new dads who are flying out there, and all the old ones too – Superbad, Superdad – Happy Father’s Day, man. And here’s the water hose. Stay cool.