Hockey night in Uganda – remember this

Hockey night in Uganda – remember this 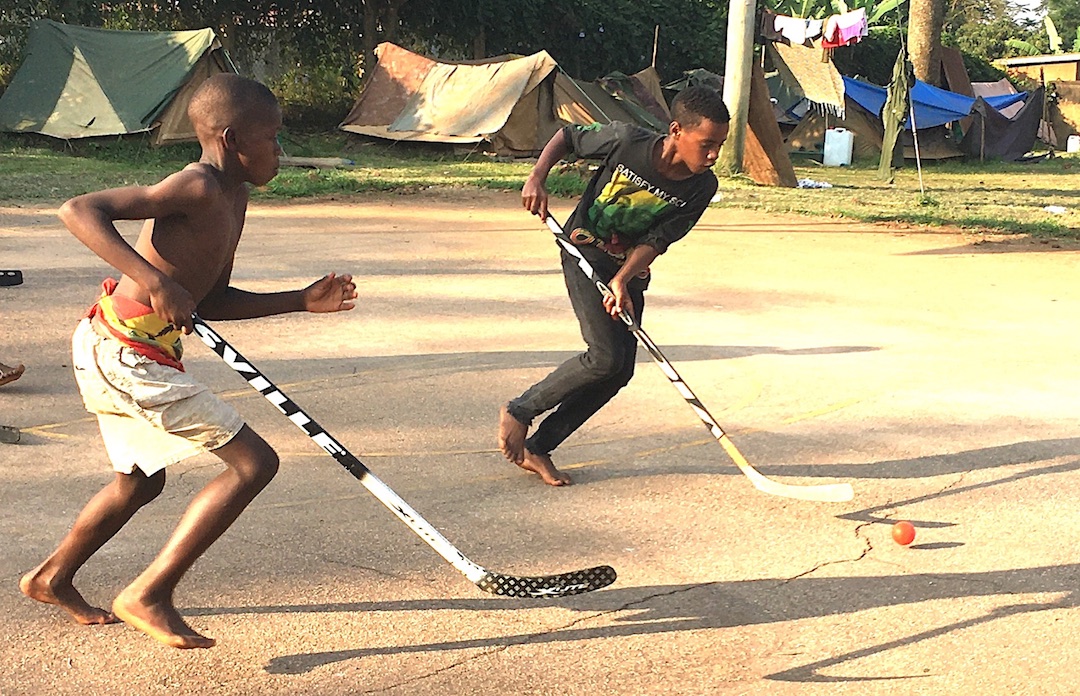 MUKONO, UGANDA ✦ It’s hockey night in Uganda and you’re running, running, chasing that little red ball that’s, of course, (this is Africa), held together with just hope and tape. During a break, you ask a question. How old are you?

“Twenty-one,” someone says. “Nineteen,” says another. “Twenty-two.” Another. “Thirty-four.” Then “thirty-nine.” Then more guys in their 20s. You look at these Africans, hockey sticks – you’d previously brought them from Canada – held in firm hands. Shirts, if they’re wearing shirts, soaked in sweat. Smiles noticeable.

“You’re all puppies,” you say, breathing.

“How old are you?” someone asks you. “Fifty-four.”

And the floodlights go out. There at the university sports-pad. At that very moment. Not that lights in Africa don’t go out unexpectantly. They do. But with this synchronicity? In the darkness, you say, “Guys, promise me something. Play hockey when you’re 54. Do this and I’ll be happy.”

Matthew is somewhere in the muggy blackness. And Paul, your old (well, young, 39-year-old) friend. And Arnold and Nicholas, and Felix, your teammates for this evening. It’s the best evening of your month-long working visit. Just like old times, somehow. Hockey at 54.

This, in 2020, is developing hockey in a developing nation. Sow some seeds, then watch the sun and rain and mystery grow them. It’s the only way, of course, because, while you’re called the father of Ugandan ball hockey, you’re also called to leave on a plane soon.

It’s tall, gangly, 22-year-old Matthew who’s the torchbearer. He’s an average player, but he’ll play until he’s 154. He’s the enthusiast, the illuminator, larger-than-life on social media: Captain Amon (you may recall from this space) as he likes to be called.

What Matthew really needs is a sponsor for his future university education. He hopes to study IT. Until then, from the other side of the Atlantic, he’s found donors of hockey gear: sticks, pads, balls, nets, shoes and such. You’re the supporting co-ordinator, even now seeking help to ship it all, North America to Uganda.

Photos come to you from Dick Price. Gosh. All that stuff. Those monster goalie pads! “It might be much now, but later they can bring their game to the next level,” Price tells you. He led a donor drive at the London Ball Hockey Association that he heads.

On WhatsApp, from Orange County, California, it’s now Ryan Bos, a real estate broker. He explains how Gretzky, fresh to LA’s budding hockey scene, was his boyhood hero. And more so, how the comradery of no-ice, rink hockey, now a significant sport in California, saved his life.

Bos philosophizes. “Nobody chooses where they’re born.” And while people tend to think they’re more significant than they are, sometimes you can make difference in life. “I’m not Bill Gates. I can’t solve the world’s sewage crisis. But this is something I can help with.”

You offer some guidance. Be wise. “Don’t offer a thirsty man Niagara Falls. He can’t drink it,” you say. And, sure, it’s great to send poor Africans boatloads of, say, shirts, unless that closes their local shirt factory. “That’s so huge, that perspective,” Bos tells you.

Captain, meanwhile, dreams of more hockey in Uganda. In schools. Across communities. Raise the Ugandan flag! He’s engaged the local mayor. Even Uganda’s sports minister. When some wet blanket tried to shut him down, he got letters allowing him to play at that university sports-pad where the lights go out at synchronistic moments.

Now you’re with him at a community center where the children play. The sun is low, the shadows long. The children have had sodas. You’ve made sure. Some prefer bare feet. Other don’t know how to hold a hockey stick. It’s okay, you say, and show them.

You ask their ages, also. And names. It’s their t-shirts, though, that get you. “The struggle is real,” says one. “Too big,” another. And your personal favourite, “Satisfy my soul.” You get photos. You write it down. You write it all down, because you don’t want to ever forget any of it.