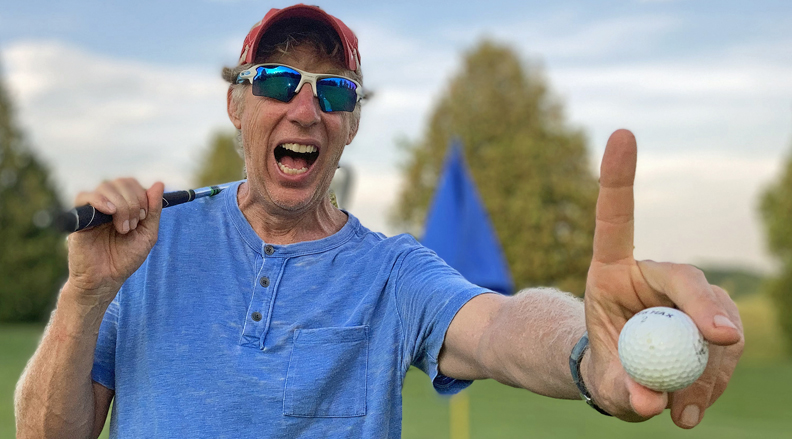 It was the first stroke on the first hole of the day, a chintzy Par 3 just under 100 yards, with a 7-iron. This is how I recently got a hole-in-one. It’s why I ran round and round, arms raised – hat, sunglasses and club thrown high – celebrating with everybody and nobody in particular.

Way to go, Thomas, you say. But what if some silky voice now sets you straight and informs you that, no, this is false. No hole-in-one. Not by Froese. Look close. Even this photo is just a set-up. The headline: “Froese gets hole-in-one, hurray for Froese!” becomes, “Are you kidding me?” Are the editors of this publication complicit in this hoax? And the newspaper carrier? What about the ISP bringing me this online? Who’s all conspiring here?

Okay, here’s the truth. I like golf. I really do. The children recently bought me some clubs. My first-ever. They’re basic. So now we – the children’s mother, the children, and my wretched back – golf. Because I love everything about golf. Except hitting that stupid little ball. I struggle with this part. If the editors of this publication ever golfed with me, they’d say, “Sorry, Froese, no thinking person would believe you’re half capable of even imagining a hole-in-one.”

On the other hand, information can be verified. For example, if I said today, August 1, is the day Woodward and Bernstein broke the Washington Post’s first Watergate story, you could check that and say, hey, that’s true. So even with cheap clubs and a hopeless back, maybe, with some dumb luck, Froese, or pretty well any half-breathing mammal, can get a hole-in-one.

Which is to say that this is about trust as much as golf. And distrust. And conspiracy theories. You know, aliens at Roswell, or the fake moon landing, or the Illuminati controlling the world, or the U.S. government (with a complicit media, all Jewish-controlled) taking down New York’s Twin Towers. That theory was popular in the Arab world where I then worked. People of influence live to conspire, you see?

I could go on. At a local public pool, a swimming acquaintance, apparently otherwise of sound mind, once told me how Bill and Hillary Clinton are, in a secret society, child-sacrificing Satanists. More recently, at my own backyard pool, a gullible soul informed me that her so-called research is uncovering that Bill Gates is somehow behind COVID-19. This theory – Bill will use vaccines to get tracking microchips inside us all – did the social media rounds with such vigour that one-quarter of Americans recently surveyed believed it’s true.

Which is also to say, even in the haze of a pandemic summer, use your God-given brain. Your common sense. Listen to voices that are trustworthy. Because when people, that is cultures, are hopelessly unable to know up from down, how can anyone trust anyone about anything, let alone work for any common good? Remember, during upheavals, when people are especially prone to wonky thinking, people also especially need to work together.

The psychologists, by the way, say conspiracy theories are more common among people who are weak in analytical thinking. Granted. Apparently they’re also more common among people who are undependable, unkind and un-cooperative in daily affairs: self-grandiose types who, in their exaggerated need to feel special, are pre-occupied with their own self-interests and schemes. Which, presumably, leads them to falsely imagine others scheming and conspiring.

So, this pandemic season, keep some healthy skepticism about the nonsense out there. But don’t lose all confidence, because human connection is built on trust. I did get that hole-in-one, after all. People watched.

So trust, and cast your bread upon the waters. Life’s just too short not to get out and take a good swing at what you can. You never know where that stupid little ball might go.