If nothing else, be kind to yourself in 2021 – not everyone else will

If nothing else, be kind to yourself in 2021 – not everyone else will 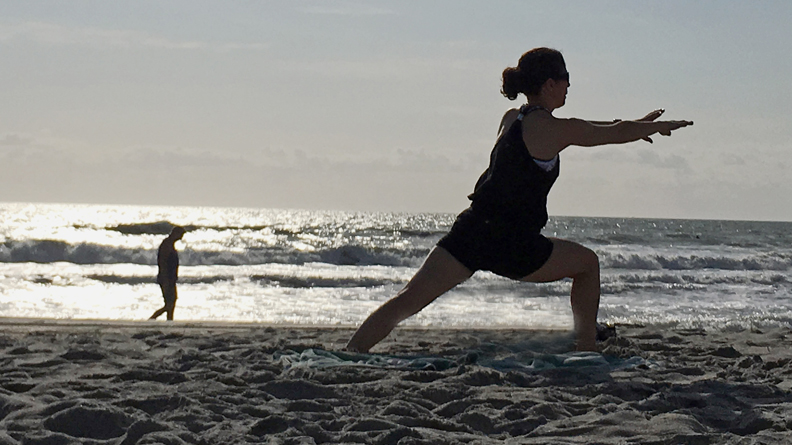 In this 2019 moment, a Pilates instructor at Cocoa Beach, Florida, shows how it’s done.

“I am a brain, Watson. The rest of me is mere appendage.” … Sherlock Holmes

I’d like to take a minute here to talk about something I know nothing about, namely your brain. But you’ll be happy to know that on this January day we’ll consider other exciting things too, like, let’s say, oh, I don’t know. The beach? Sure, let’s talk about the beach too.

First, let me say I was recently shooting pool with the boy when he told me that his New Year’s resolution is not to make any resolutions. This indicates my teenage son’s clever and slothful ways – not the worst combination if the latter leads to the former. It also seems to verify that his mother and I are doing something right, at least if he already understands the sorry truth of it, that resolutions (by the way, Happy belated New Year) simply don’t work.

In fact, according to the people who like to study these things, less than one in ten resolutions that are made actually lead to behaviour change. This is because while you may have great motivation, (let’s walk on burning coals for 10 km!), if you don’t understand the difference between motivation and habits, you won’t get far.

Put another way, and I apologize for getting all technical here, your prefrontal cortex (in scientific terms, this is the gray matter in the front of  your noggin) works with your basal ganglia (which is not to be confused with any spice in your kitchen.) The prefrontal cortex helps you envision what life could be like. The basal ganglia controls your automated activities.

The trick is to match your high-minded desires with your day-to-day abilities, knowing humans easily overestimate their ability to control their own behaviour. So the best way to match desire and ability – and this is the point of today’s rumination – is to start stupidly small. In fact, when my boy told me about his no-resolution resolution, I went down on all fours and did a push-up, such as it was, and told him what I’m telling you.

Yes, I once read about a man whose daily fitness goal was a single push-up. No gym. No workout. No stress. One push-up. If he wanted, he could do more. But one was his stupidly small, and attainable, daily goal. Then hope. Then confidence. Then new neuron pathways. Then six months (six months!) later to the gym for more. After. The. Habit. Was. Formed.

Speaking of the gym, you know Arnold Schwarzenegger. Mister Olympia? I’m not him. You know Ichabod Crane? That’s me. Thanks arthritic, auto-immune disease. So, speaking of the body, I understand modest goals. I should drink more water, I told myself not long ago. Canada has enough fresh water for me to drink more of it. First one extra glass. Then two. Then, you get it.

And now, speaking of water, the beach! This way, people! Yes, one fine morning my boney knees and I went to a Florida beach to practice some Pilates. You know, stretching and breathing and such. I was the oldest participant, the only man, and the only one who creaked like old floorboards with every move. This was a couple years ago. But now, most mornings, I stretch and easily hold certain positions, like “the plank,” exponentially longer.

I’m just saying. You want to read War and Peace? Start with one page. Doing a little is always better than doing nothing. And small regular steps will beat large sporadic ones. If you feel resistance, just go stupider and smaller.

If it matters, (and it probably doesn’t), one study from the European Journal of Social Psychology found that it takes on average 66 days of daily repetition to form a new habit. But, of course, it depends on the habit. In either case, remember: baby steps.

Because repetition is the language of your subconscious. And this is where most of life’s battles are won or lost, where you do, or don’t, become the master of your own domain. Remember to be gracious to yourself when you slip and miss a day. Remember also to reward yourself for good behaviour and following through.

Yes, if nothing else, be kind to yourself in 2021. Not everybody else will be.