For the love of a handwritten letter

For the love of a handwritten letter 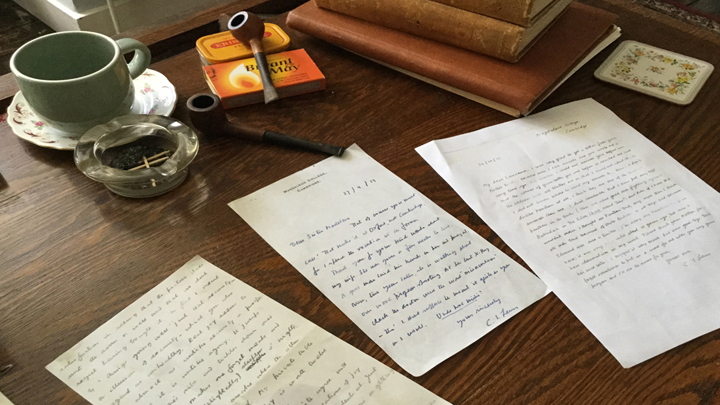 Today’s rumination is about the art of writing. Cursive.

For the children out there, you’ll want to ask your parents or grandparents what this is, and how it all works, and why on God’s good earth anyone would involve themselves in it.

I feel like a Neanderthal for even mentioning it, but since I’m older than I look I’ll tell you that when I was a child I not only spoke like a child and reasoned like a child, but I wrote letters, in cursive, like a child, that is with some amount of bloody agony.

“Dear Uncle Wilfrid, Tante Ilse, Klaus and Norbert,” I’d write my cousins and their parents in Winnipeg. “How are you? I am fine. Heidi got run over by a motorboat at camp this summer. But she is fine too. Love, Tommy.”

Heidi, my sister, also wrote letters. Her beautifully flowing penmanship would always lord itself over my wobbly scribble. We’d sit at the kitchen table, me crinkle-faced, looking at the ceiling, doing things with my pen and my nose that you don’t want to know. The lined page had to be filled. I’d write large.

But I’d always sign-off with love. And this taught me young that the mere act of writing, as hopelessly crooked and sloppy as it might appear, can often be an act of love.

It comes to mind because the children and their mother and I just received letters, handwritten, from some dear Ugandan friends. Paul, who tended the grounds of our former Ugandan home for years, signed off with “Yours in faith.”

This, in handwriting learned from basic Ugandan schooling, writing that, interestingly, doesn’t look much different from the fine European script of my Tante Eva, who, from Berlin, well into her 80s, still faithfully writes the children, even as they faithfully, by hand, write back.

Letters also come to mind because this week’s anniversary of John F. Kennedy’s assassination is the same Nov. 23, 1963 death day of C.S. Lewis, the Oxford don who wrote, among many other things, the now immortalized Chronicles of Narnia.

The children’s mother and I have always thought highly of the good professor. She and I honeymooned in Oxford. Then, last year, in spring, during our first visit back, we bicycled with the children to Lewis’ old Oxford home, now a modest student residence where, if you’re lucky, you can arrange a private tour of Lewis memorabilia.

It struck me to see that Lewis placed his writing desk in his tiny bedroom. That’s a workspace I always imagined as harmful to good marital relations – (Lewis’ late-in-life marriage is also immortalized through the movies) – until I had to recently put my own desk in my wife’s and my bedroom because of our home’s ongoing renovations.

In that intimate space, Lewis handwrote many of his estimated 3,274 lifetime letters. Many were to his fans. In 1955 alone, he wrote some 180 letters. He’d dutifully respond to every piece of fan mail to the point of dreading the daily arrival of the post.

At my writing desk, I have no such problem. No, unless they find an old letter to Klaus and Norbert, the historians will be disappointed.

So I’m, in fact, leaving it to my children to pass on the good sense, the joy and intimacy, the giving and receiving, of cursive writing. One of the three children thought it so important, she taught herself. The other two, after first learning in their international school in Uganda, now continue to receive formal cursive lessons in their Flamborough school.

Which is rare, because a majority of school districts across North America have removed cursive from mandatory instruction in recent years, leaving it to teachers’ discretion.  There’s no time, don’t you see? This is why we have computers. Which is a comment on our culture’s disconnect from time as much as anything, our inability to handle those moments of stare-at-the-ceiling nothingness.

On the other hand, if my children don’t pass on their handwriting abilities, then my grandchildren – and yours– can always study history to learn what in the world those old letters and documents actually say.

They can sign their driver’s license with an X.

And that love letter sealed with a perfumed kiss? Just text it.