Ninety-Nine Windows: Reflections of a Reporter From Arabia to Africa and other Roads Less Travelled features ninety-nine newspaper commentaries by Thomas Froese, particularly from his experiences in the Arab World and Africa. His dispatches begin shortly after the attacks of 9/11, from the historic Arabic city of Sana’a, Yemen. He wrote from Yemen for several years before moving to the Kampala capital district of Uganda. From these far-flung locations, Froese opens windows into news, travel and life while he explores his personal journey of faith and his vocation as a writer.

“Thomas Froese’s encounters while in the Arab world and Africa make richly rewarding reading. He has an eye that is both whimsical and compassionate.”
– David Aikman, former senior correspondent for TIME

“Froese prods and wrestles with life’s larger questions. His columns tread the transcendent. Yet he never forgets where he comes from.”
– Anna-Liza Kozma, CBC Radio Producer

“Each “window” offers the reader an exquisite glimpse of what it means to be human in the 21st century, with all our strengths and weaknesses, joys and sorrows. Thomas Froese writes with the heart of a poet. He has thought deeply and carefully about life.”
– Patricia Paddey, author and journalist

“These incredible columns chronicle life, death, poverty, war and faith: a compilation from a guy wearing a Team Canada cap on a remarkable journey.”
– Casey Korstanje, former Canada and World Editor of The Hamilton Spectator

“Read this and be enlightened in the true sense of the word.”
– Julia Bicknell, former BBC World Service Producer 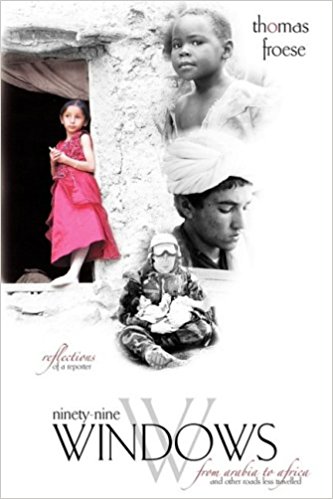