On dreams, flying and Aslan’s country

On dreams, flying and Aslan’s country 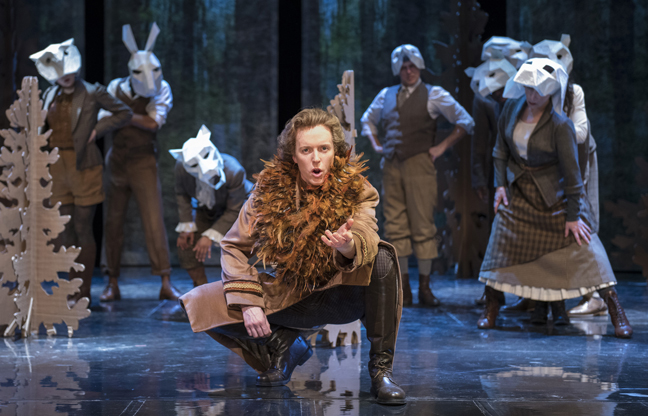 Kyle Blair as Aslan with the cast of The Magician’s Nephew. Photo by Emily Cooper

NIAGARA-ON-THE-LAKE – I had a dream the other night, an outrageous foray into the sublimely bizarre. I was fighting a gorilla. He wore glasses, which, funny enough, looked like mine. I stood in the cleft of a rockface, and had a motorcycle in my shoulder bag. I was going to ride away, fly, somehow. Crazy for sure.

Our dreams are such a mystery. Then again, so is our reality. So is the sometimes blurred line between the two.

Jung, the psychologist, told of the power of dreams, especially shared dreams. Which leads us to Aslan, the lion, a sort of king of dreams. He said something similar. He said that our present world is the dream. (And a dull dream at that, one that will eventually give way to a reality far beyond anyone’s imagination.)

“The term is over. The holidays have begun. The dream is ended. This is morning.” This is how Aslan, who is literature’s best-known lion, once explained it. It’s a wild lion thought, the sort of idea that you can fly with.

Not that Aslan’s ways are not well-rooted. When I was a boy I worked a vegetable garden on a plot of earth where five houses now stand. So I know the ground and rootedness even as I know Aslan. He’s not flighty in that sense.

He just helps lighten the sometimes crushing loads and crap that are left for you or me or any old ox to pull. He gives you, that is the characters in his stories, a light, easy yoke. It’s like a well-worn garment that’s made just for you, one that fits even your strangest idiosyncrasies.

And some days, the best of days, it does seem like you can fly. If anyone tells you otherwise, then they just don’t know Aslan. And they don’t know themselves. They certainly don’t know what it’s like to dream. Which would make it hard to understand any shared dream.

I tell you all this all because, with the children and their mother, I was recently at the Shaw Festival’s showing of The Magician’s Nephew. This is a Narnia chronicle, the first of seven written by C.S. Lewis more than 60 years ago now. The Narnia stories still sell – to date, more than 100 million books in 47 languages – and they still get adapted to stage and film.

And it seems to me that this success is because of Aslan. Not that he appears very often. He doesn’t. You wouldn’t want him to. He’s not a tame lion, you know.

But Aslan’s country – a shared dream if there ever was a shared dream – has a certain pull to it. It’s about an embarking, an adventure, and, at the same time, a homecoming. As Jewel, a unicorn, put it, “I’ve come home at last. This is my real country. I belong here. This is the land I’ve been looking for all my life, but I never knew it ’till now.”

I could share more about Lewis, in many ways the last person you’d imagine telling these sorts of stories. Or I could tell you more about what happened in this particular Narnia story. But you can find that anywhere. It’s the dream issue, really, that needs sorting out.

Even before this stage play began, there were so-called dream investigators milling about the theatre. There, with notepads and newsboy caps, looking like old-time reporters, they asked the audience about, not surprisingly, their dreams.

One boy said that he’d had a nightmare. So he turned it into a musical. Which is another fine way to think about Aslan and his ways, this big story.

Yes, in Narnia, Lewis created a remarkably diverse place, as hopeless and hope-filled and mixed and mixed-up as what you’ll find on any street around here: a place with centaurs and dwarves, giants and flying horses, queens and magicians, all trying to figure things out.

All this, with, of course, the children, who, with piercing realism and love, Aslan calls the Sons of Adam and Daughters of Eve,

Lewis really did manage quite a creation. Or maybe Aslan, who goes by a different name in our world, created Lewis. And you. And me. And anyone who is burdened enough and alive enough to look for an appearance of the great beast.