Once there was a border …

Once there was a border … 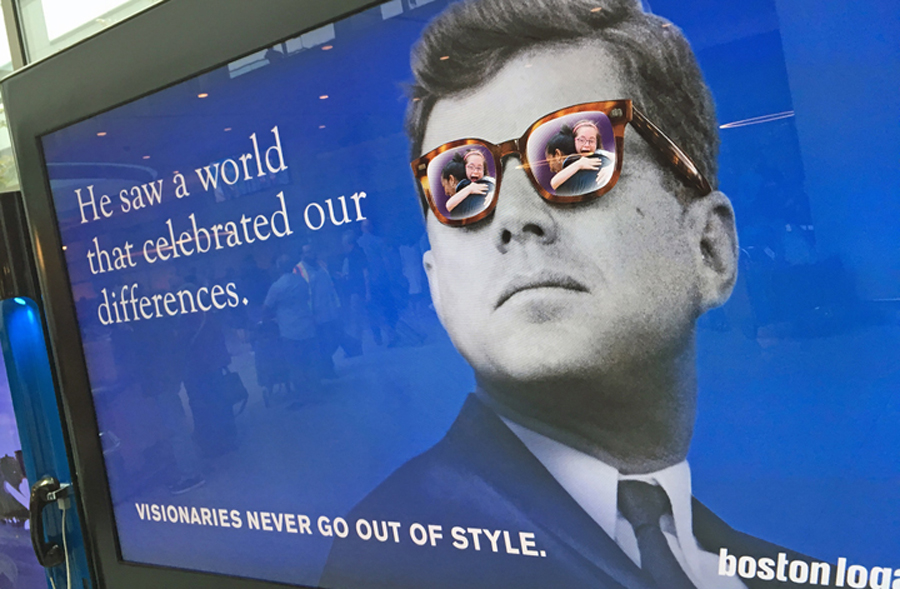 A billboard at Boston Logan International Airport celebrating U.S. President John F. Kennedy.“What unites us is far greater than what divides us,” he once said of America’s unique relationship with Canada. The Canadian-American border was created 200 years ago today.

BOSTON – Once there was a border that had an anniversary. Today is it.

Before I share more about it all, let me say, though, that you have to be careful what you think about borders. Because in a way there’s no such thing.

Of course, I recently crossed the American border to get to this city, Boston, a diverse place with many people who’ve arrived over various borders from other nations. I’ve spoken to some.

But borders vanish if you take the longer view from afar, from a distance that shows that “pale, blue dot,” as our earthly home has been called. Ask any astronomer or astronaut about borders.

Or consider John F. Kennedy, the American president who’d not only talk about the moon, but make you believe that you could go and walk on it. Listen to the speeches, the rich orations, about certain universal values: the God-given worth and honour of any human being, and how America, with its wealth and power, might help at least some, wherever they may live.

No, at humanity’s best, there are no borders.

It’s here in Boston, this spirited region where Kennedy’s life was so entwined, where I’ve been reminded of it, especially at the John F. Kennedy Presidential Library and Museum. It’s a worthwhile space built on Boston’s shores 40 years ago with donations from, remarkably, 36 million people worldwide. Even today at Boston’s Logan airport you’ll see billboards honouring America’s 35th president. In 2017 he’d have turned 100.

So there’s a celebration. And, it seems to me, there’s a fresh grieving too. Grieving because the zeitgeist, the spirit of the times, tends to cascade from the office of the American president. And in JFK it’s hard to imagine a commander-in-chief more different than today’s sitting president, the hopelessly narcissistic one.

Of course, Canada has just been through the game with NAFTA’s retooling. All that anxiety over all those goods, $544 billion worth, trading to-and-fro over the Canadian-American border. But nations are more than the sum of their economies. People are more rounded. More relational. More, in this case, married.

Kennedy once put it this way. “Geography has made us neighbours. History has made us friends. Economics has made us partners. And necessities has made us allies. Those whom nature has so joined together, let no man put asunder. What unites us is far greater than what divides us.”

And just what does divide us? Quite literally, a 9,000 km long borderline, a remarkably free border, the longest border of our time, maybe any time. Two hundred years ago today it was created. Happy anniversary to us. All of us, on both sides of the divide.

The Americans and British created our current border when they signed the Anglo-American Treaty of 1818, on Oct. 20. That’s when they laid the new, revamped border from the so-called “Stoney Mountains” along the 49th Parallel, the borderline that’s so recognizable to us today.

Of course, that exercise was not an entirely peaceful undertaking either. Even strong and secure marriages have their moments. Even so, it was something. It was, and is, our family heritage.

My own view is more optimistic. And we can only wonder where things might be in 200 years, even as one might wonder about the next JFK: from where he or she may come, or what visionary thoughts they may have, or what prayers.

“O, God, Thy sea is so great and my boat is so small.” This is the old Breton prayer that JFK loved. So much that he kept it on a block of wood on his presidential desk. Fitting, for someone who loved the sea, as the sea often is, without borders.

It reminds me of the ships that travel through the canals of Niagara. I’d easily see them from my back porch when I was a boy. They were from so far away, from around the world. Yet they were there, right there, beside me.

Maybe that’s another reason why I do and don’t think much about borders, why they do and don’t really matter so much.