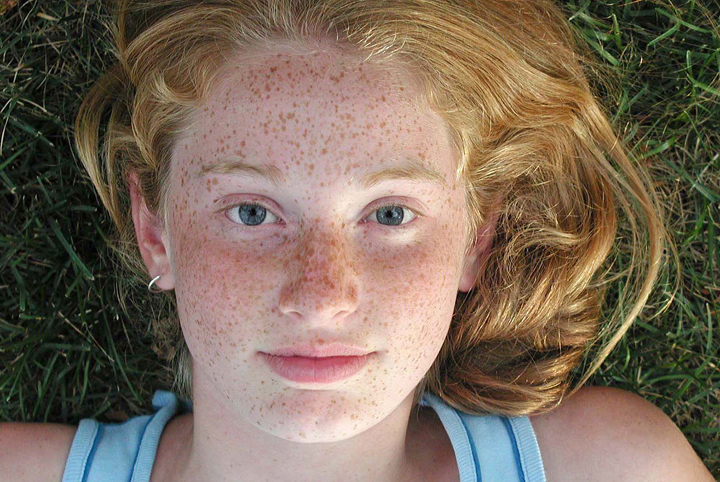 We’re in a graveyard at an ordinary plot, if any death or plot can be ordinary. A large oak – it must be 200 years old – towers behind us. Sid’s daughter, Rachael, is buried here. Sid has just knelt to brush the day’s debris off her tombstone. Rachael died by suicide. She was 18.

Surrounding us are more stones with more etched names of the dead. Thousands. It’s not the first place you’d bring the kids for, say, cupcakes and ice-cream. Then again, if there’s more to life than just imminent and hopeless death, why wouldn’t you?

Rachael was clearly a young woman to celebrate. Creative. Adventuresome. Funny. See her photo, this one published by National Geographic in its Faces of the World collection. This is Rachael: a striking face of the world. For those who loved her, she was also much more.

“When she died it was like an atomic bomb exploded,” Sid tells me. Six months later, his first wife, Caroline, a children’s eye doctor, died of cancer. She’s buried just footsteps from Rachael. Left raising three other daughters, this father then clung to the mystery of existence like you’d cling to Niagara Falls, praying for a deliverer. It was 12 years ago.

But the real tragedy, Sid says, is that Rachael’s death could have been prevented. If she’d just had a clear diagnosis. A dedicated counsellor. Psychotropic medication helping with other supports. “I’m convinced she’d be alive today,” he says.

So Sid the runner has since run another road, one to strengthen mental health supports, such as the Suicide Prevention Community Council of Hamilton, which he chairs. It’s helped his own healing while also honouring Rachael’s expressed desire – “I’d like to help others” – when she was doing well.

And there are others to help. Across the street and across the world. Globally, in the time it takes you to read this, a handful of people will die by suicide. On any given day, suicide takes an average of 10 Canadians. And in Hamilton? Each year, about 50. Fifty Rachaels.

We’re all so together in our aloneness. In our disorientation. This is the human condition. And there’s no shame in it. So listen. Now listen more. And more. Listening, after all, is the first step to help the vulnerable find those supports.

It’s all so bittersweet. There’s Rachael’s most recent birthday. On that summer day her loved ones, including four of Sid’s grandkids, did, in fact, visit this grave plot with ice-cream and chocolate cupcakes, Rachael’s favourite. It’s a foretaste, maybe, of another reunion on another day, an eternal party to end all parties. And what would Sid say to his daughter? “I love you.”

But about running. To honour Rachael’s memory and strengthen those community supports, people are now running. The 8th annual Run for Rachael, virtual for this pandemic year, kicks off this weekend. Last year $30,000 was raised for suicide prevention. So take a minute to learn more at www.runningforrachael.com or www.spcch.org. Then run. Today. Tomorrow. Run any day, really. Or walk. And give.

I will. And not just because my own life has been touched by suicide. But because life, if nothing else, is a run, one where you learn, hopefully, to steward your pain. Sure, you can hide it. Keep it secret. But then you pay a price. Conversely, steward your pain well and learn who you’re meant to be.

Sid puts it this way. “I will die with that scar in my heart. But I can celebrate.” This is what he said. “Celebrate.” I’m sure he has his times of doubt. But then he shares about the joy of helping others.

This is Rachael. And Rachael’s father. And this is a strange celebration. It’s how Rachael’s father runs. He runs with a certain pain. But he’s one of those runners who then trades that pain for other things. For more life, really.

It’s a good trade. And it’s a way that’s worth following.