Some roads less travelled in Nigeria

Some roads less travelled in Nigeria 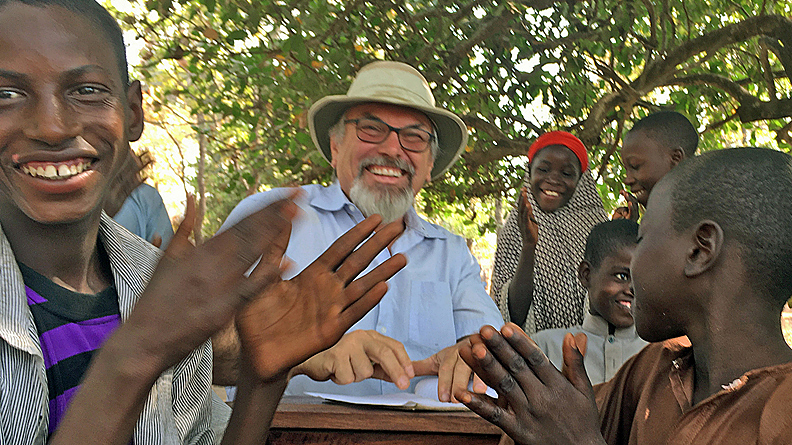 Hamiltonian Rick Bradford with children in the Nigerian village of Okuran, one place in the impoverished West African nation where’s he’s recently built a school.

EGBE, NIGERIA ✦ We’re on our motorcycles — my friend Rick has offered me his for the afternoon — at a place called Prayer Rock. It’s a lookout at the end of a bumpy, winding dirt road near this historic town in Kogi province, a brown patch of earth in central Nigeria that’s been touched by Canada.

It’s my last day here. The spot seems as suitable as any to finish my week in this West African nation. God knows the place needs prayer. About half of Nigeria’s 190 million people live in extreme poverty, on less than $2 a day.

Then again, there’s more to it. Real life, like real living, often has little to with the news or fears of any given day. I mean, when you think of Nigeria, what comes to mind? Boko Haram and all that? Or maybe it’s Old Man Trump’s recent move to add Nigeria to America’s list of travel ban nations.

Yes, Nigeria is one of those maligned kids in today’s global playground. But there’s Rick Bradford, his hand underneath this kid’s chin, lifting it gently and saying “Don’t listen to the lies of the world. You’re worth more than you imagine.”

And if you walk with Rick along some of these dusty roads less travelled, you’ll see this response. Children with open arms. Village chiefs with open arms. Other local Nigerians befriended here and there, also open armed, affectionately calling out “Daddy!” — a common term of respect and endearment around here — when Rick drops by.

As a lay leader in his church, Philpott Memorial on York Street in downtown Hamilton, Rick has been missions minded for years. And it’s his thoughtful and easy relational way that’s especially helpful in a complex place like Nigeria, where he’s worked since 2014.

A former Stelco worker of 30 years who’s now with the global mission SIM, he first helped Nigerians with his fix-it and metal-shaping skills renovating a mission hospital here in Egbe. More recently, while his wife Martha runs a music and computer academy, Rick has been building nearby village schools.

There he is a couple of days ago in one village, Okuran, pointing to letters on a blackboard in one school he’s checking in on. It’s a three-room cement block structure bursting with 178 kids, some taking two hours to walk there. Children call out each letter. I watch.

The day before, in a village named Omi, it’s another school. The girls, smooth and gentle faces framed by colourful hijabs, learn alongside the boys, at least boys not away herding cattle. Herding is common for Fulani, a semi-nomadic Nigerian tribe, primarily Muslim and often feared. Rick works closely with them. The children, like elsewhere, flock to him when he arrives.

The day before this, it’s Samanaka, a Fulani community of 2,000. Villagers had walked more than a kilometre to a drying riverbed to collect nothing but muddy water. This, before Rick helped: providing funds to fix their well’s cracked pipes, supervising the repair. This I also watched, life-giving water then pouring out. Here, also, the open arms.

For Rick it’s service that’s not much different from working on, say, the roof of Philpott’s old York Street building. “I know that roof well,” he’ll tell you. Funny enough, Egbe’s best-known mission worker, Tommie Titcombe was also a metal worker sent from Philpott. From 1908 to 1928 he planted 42 churches in the Egbe region. When locals first learned that Rick came from Titcombe’s mother church in Hamilton, Canada, 300 gathered to welcome him.

Rick laughs. “I felt like the queen or something.”

This is how my friend walks here, with compassion and steadiness and some good humour. He also walks with the hope that the motivation behind his service — he became a Christ Follower when he was a teenager — will shine through.

“No matter who you are, you’ll always leave an impact on others,” is how he puts it. “The only question is what kind. But this changes dramatically when you bring faith into the picture. You either leave hope or you take hope away. So we want to go back a bit and ask, do you yourself, as someone serving others, have hope? And if so, do people see it in you?”