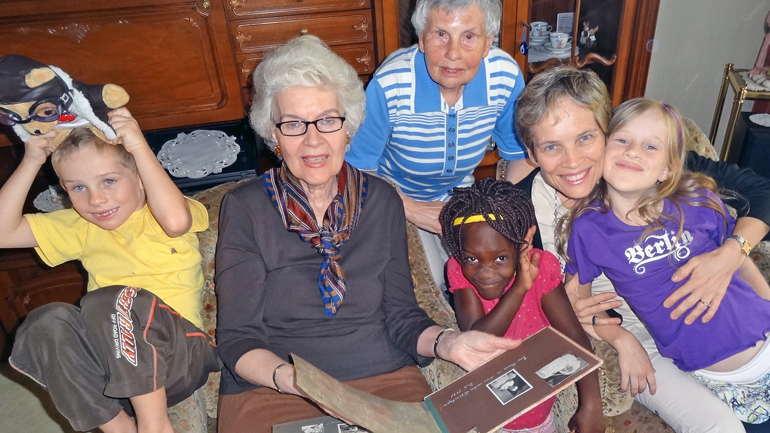 I’ve always seen the face of my Tante Eva as a face of summer.

There she is in this photo from some years ago, standing behind my bride and our three Chumbuckets, along with Eva’s friend, Ingrid, who’s holding photos from Eva’s birth in July, 1931. Eva, the newborn, would eventually know war and other sorrow before she’d grow fully into that woman with a kind face. This week, Eva, a lifetime Berlin resident, turned 90.

It’s not the most uncommon milestone anymore – more on this in a minute – but Eva, a career nurse who’s lived single in the same Berlin apartment for more than 50 years, has still arrived at this life-marker in interesting fashion, especially because of her long-time care packages.

They began some 50 years ago when I was in kindergarten, when German chocolates and gifts and affection were mailed Berlin-to-Canada for my sister, Heidi, and myself. We’d just lost our mother, Eva’s older sister and only sibling.

Fifty summers later, like an umbilical cord stretching across time, Eva’s gracious packages continue. “Can we open Tante Eva’s box now?” the kids will ask, looking at my aunt’s familiar European script written on the overseas parcel with the obligatory stamps and foreign markers.

I’ve seen Eva just a few times, one summer when I was a young writer returning to my native Berlin for some work. There we are atop Berlin’s soaring tower, the Fernsehturm. Below us is a newly-unified Berlin: drab grey of the former Communist east on one side, the richly-coloured west on the other. Another day I stood with Eva at my mother’s Berlin gravesite, my first time. Later that summer Eva gifted me with old family writings and photos, all priceless.

“Honour your mother and father,” is how the old commandment goes, so your life will be long and blessed. But in my family it’s Eva who’s honoured the generations following her, opening windows in a way like she wrote on the back of a recent photo, “Kastanienblüten vor meinem Fenster,” that is “Chestnut blossoms outside my window.”

I share it because, whatever your age, you might have your own Tante Eva, a senior-of-seniors, who’s still contributing to your life. There are more 90-year-olds – nonagenarians – than ever. My other aunt, in Ontario, is 92. My father also turns 90 this summer.

Further abroad in the world of celebrity, well-known nonagenarians now include William Shatner, who’s 90. Barbara Walters is 91. So is Clint Eastwood, Buzz Aldrin and Bob Newhart. Dr. Ruth (Westheimer) is 93. Harry Belafonte is 94. Dick Van Dyke is 95. So is Angela Lansbury.

They’re all approaching 100 years in good company, especially in North America, Europe and Japan, which has the highest rate of 100-year-olds. By the end of 2021, the UN estimates there will be 573,000 centenarians worldwide. It’s a significant paradigm shift in Western culture.

It’s easy to consider how to conveniently warehouse all these superaged super-seniors, or, now in Canada, how to best offer a lethal injection of secobarbital for a faster exit. But there’s a certain beauty in even the inconveniences of old age. Some cultures recognize it. Japanese seniors live especially long, often with family in multi-generational homes. In Japan, where there’s a national holiday honouring elders, centenarians have doubled every decade since the 1960s.

On this, on the heritage and value of our elders, in Canada we can also learn from our Indigenous community. Around the same summer I was that young writer visiting Berlin, I was also reporting about a child custody dispute, a lengthy and snarly ordeal involving a mixed-race Ontario family. The white grandparents wanted to legally adopt their two half-native grandchildren after neither of the children’s parents could care for them.

Children’s Aid had threatened jail for the grandparents if they didn’t hand over the two kids. The grands had been legally fostering them for some time. Eventually, in a remarkable turn, those grandparents received full custody after community elders from the children’s Indigenous bloodline stepped forward and affirmed those two seniors as wise elders in their own right, best-suited to raise their grandchildren while still honouring their native identity.

There’s that power of extended family, again. “Danke sehr,” or “thank you very much,” is the response from those who understand that good things can come from it.