The fragrance of (my) life

The fragrance of (my) life 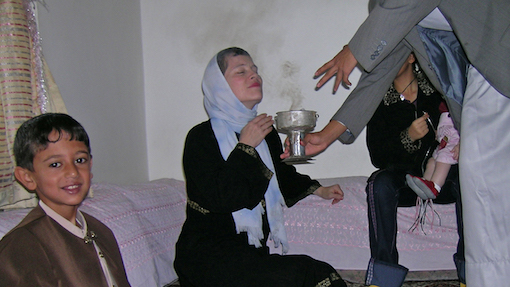 Dr. Jean Chamberlain Froese, in this 2004 photo, smells the fragrance of the Yemeni culture she was immersed in during early days of her life overseas with Your’s Truly.

So I’m in the middle of Africa dining with a colleague and he declares, “That’s great news about Jean. Congratulations!”

Out comes his phone and all the details and I’m in the dark and feeling rather sheepish about it. My bride, the children’s mother, in her natural humility, hadn’t told me of her recent recognition as a Canadian doctor who’s contributed greatly to women and children’s health abroad. It’s the latest of many recognitions, not the least of which, you may recall, is the Order of Canada.

In either case, the children’s mother is both easy on the eyes and easy to write about. And long before most people had an inkling of her overseas work, I watched her running around in, of all places, Yemen, in her hot black balto — the “choir gown” as she called it — learning the language, making local connections and recruiting others to help some of the world’s neediest mothers and children.

That was then. Now we’re in those anniversary days, the start of our lives together as travellers, starting there in Sana’a on a street with no name. This, even as we’re in the anniversary days of our engagement, 12 months earlier, Valentine’s Day 18 years ago.

I mention it because any couple, really, is a travelling couple, on a journey of sorts, even if (like me before Jean) you rarely get past your living room. So in this spirit, here are some tips, a sort of Big 5 I’ve discovered along the way, something to ponder like you might ponder Africa’s Big 5: the elephant, lion, rhino, leopard and Cape buffalo.

1: When people are completely dumbfounded about your upcoming wedding, just nod politely. As one newsroom colleague remarked to Jean, my then fiancé, “We don’t understand. I mean, we look at you and we look at Tom, and, well, you know.”

Yes, at the time, Jean’s impact on my life was so profound, I even altered my name — from Tom to Thom — like that traveller Abram becoming Abraham. A new person, I was, with a new destination.

2: Never underestimate how almost being shot dead (or contracting malaria several times) can strengthen your relationship. For more on this, see previous files. But for your own story, just know that your own shared uncertainties — take your pick — can bind you closer.

3: Accept times alone. They’re lamentable but necessary. During my recent expedition into Uganda, the children eventually joined me while Marms (as the children call her) stayed home. You’re apart? Studies show, for most couples, absence does make the heart grow fonder.

4: Celebrate times back together. Like, for my bride and myself, today. This works well as anniversaries go. In fact, we’re reunited this week just in time for her to, unknowingly, pick up today’s paper and read this, blushing, naturally, a day we’ve gone somewhere, you know, by ourselves.

5: Attached or not, smell the roses. The children’s mother is the fragrance of my life. But life itself has its own fragrance. We were both single well into adulthood and that was fine too. So wait. And enjoy that ride too.

Yes, you’re more than your family or relational status. Or your sexuality. Imagine that. You’re much more. So the reader questioning my use of “the children’s mother” has a point.

So do marry well. You’ll never make a more important decision. But marry well, so to speak, in all your other connections too, different as each is. This, it seems to me, is a wellspring of life. And the joy on your journey.