The holiness of motherhood

The holiness of motherhood 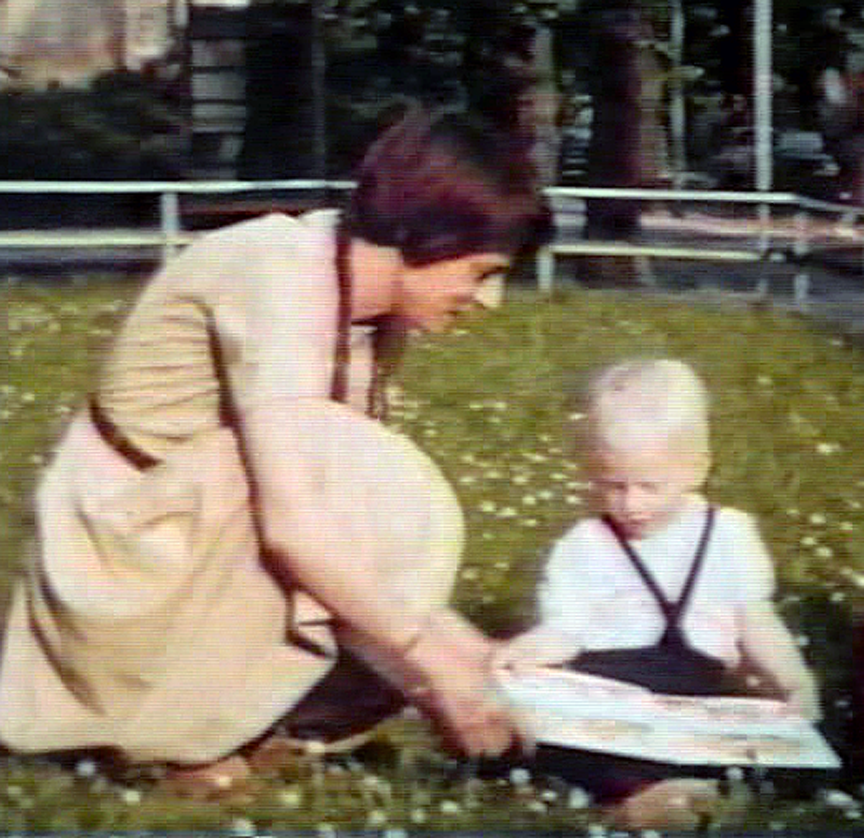 There’s something holy about motherhood. My father’s tears remind me. My wife’s steadiness reminds me. Even my mother, in her long absence, reminds me.

There we are sitting in a meadow in Berlin. A large book is on my lap. My mother is teaching me to read. We’re enjoying each other. She tickles me. My pant suspenders – I always laugh when I see this – look like they’re on backwards, but they’re not. My sister is nearby. We look happy. There’s a fence. At one moment we look skyward.

The scene is from an old home movie I keep in a white box in a safe place. It’s not really a memory. For one, we don’t remember the past as much as we reconstruct it. Also, I was too young to remember my times with my mother. So I’m left working with old, opaque images.

Now my mother, indoors, pulls back a curtain. She bathes me. Feeds me. Holds me from behind while I walk – I’M WALKING, PEOPLE! My face shines. My mother is there, unseen, holding me up. It’s really something, a rare scene in my story.

Now my mother, Hannelore, throws me in the air. We laugh. We both laugh wildly, but there’s no laughter, not that you can hear anyway; just gentle, strange music added later.

This is the film, an old 8mm now on DVD, kept in that white box of sacred family items. It’s the sort of box that you’d run for if your home ever caught fire. Because life is short and death is imminent, but my mother’s life, as previously shared in this space, was shorter than many.

Years after her death, my father still couldn’t talk about my mother without choking up and fighting his tears, making it painfully obvious that there are holy moments, and when they arrive, you remove your shoes.

This is the nature of creating, or at least co-creating, as any mother does. It’s about things much larger. Which is why I’ve sensed my mother’s presence. The love of even a temporal mother reflects the mother-heart and love of a never-ending God.

So it’s in the tears of my father, who was both father and mother, where I’ve seen this holy nature of motherhood. When he eventually remarried, I was his best man. Which is to say that this weekend is for the stepmothers out there also, for mothers of any stripe, really, because if motherhood is about anything, it’s about more than biology. These are our stories.

I met up with a friend this week. Some years ago he’d lost his wife and daughter, both gone within six months of each other. His teen daughter died in the same manner that my mother died. But there’s healing too. And my healing continued when I serendipitously married a “baby catcher” as she fondly calls herself, my wife, an obstetrician long committed to mothers.

She’s steadily delivered more than 2,000 children, most in this community, in a vocation that, as you might imagine, also sees its share of tears. As founding director of the charity Save the Mothers, she’s also been committed to vulnerable mothers abroad. Worldwide, about 300,000 women still die in childbirth yearly, virtually all in developing nations.

There, when a mother dies, a child is five times more likely to die before five years, my age when my mother perished. For older children left behind, the issue is education. Mothers ensure their children are schooled. In richer nations it’s more about nurturing and bonding. When a mother dies, fathers – at least the good ones – become that mother and father, both.

Today, in a Dundas park, my petite wife, my children’s mother, will stand tall as always on a picnic table for people to gather and listen and think more about this: What’s the value of a mother? Mine. Yours. Anyone’s. Then, like in several other Canadian cities, participants walk in this annual Save the Mothers fundraising tradition.

It always unfolds in a somewhat ordinary way. But isn’t this the truth about holy ground? You don’t always know when it’s under your feet. You don’t have to. Just keep walking. And honour the day that you’re given.