The upside of having your wallet stolen

The upside of having your wallet stolen 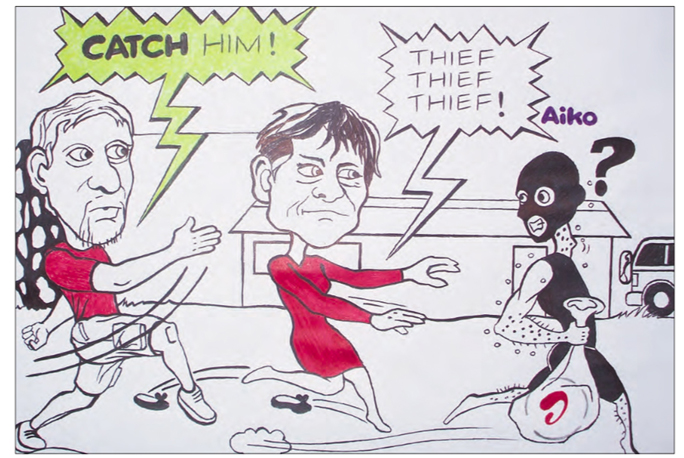 The latest news from this corner is that my wallet, soggy and laden with earth beetles, was found in a neighbour’s rock garden. The phone call came.

“Are you Thomas Froese?”

“I have your wallet.”

It was handed to me in a plastic bag. Hard to say if this is good news or bad. It’s like someone finding a body. Good for closure, but a reminder of your loss.

The wallet was stolen a week earlier. All its cash, the children’s monthly allowance, was gone. The garden-cleaning neighbour, after finding my ID in the wallet, made the call.

On a positive note, the children’s mother did not observe this particular theft. Otherwise she’d have chased the oily thief down and then likely committed a more serious crime. More on this in a minute.

The other bright note is this: Just when you think you’re rather inadequate in teaching your kids about money, the universe comes to your help with this sort of boondoggle. Getting robbed can lead to money lessons pouring forth like lemonade on a street corner stand.

Protect your valuables is the obvious lesson. Hey, Dards, thanks for the good teaching. Nice lesson Dards. Well done.

A less obvious takeaway is that you’re reminded not to get too attached to your stuff. After all, when you’re ripped off – and during our years in Africa my family was robbed so often we lost count – you realize that, in the big picture, it is just stuff. Stuff that can be lost slowly through rust and moth, or stuff that can be lost much faster, in the twinkling of some thief’s eye.

In a place like Uganda, your children might arrive home to find their piano keyboard gone. Christmas shoplifting, you see. Or, late one night, a hand might reach through their bedroom window and steal a laptop. Or your purse might vanish: someone in and out of your home in just seconds while you, the children’s mother, are outside, back turned, only metres away.

That nonsense stopped once we got a German Shepherd. But even the dog couldn’t prevent some 50 metres of chain-link fence from disappearing. The fence, which was part of a much longer perimeter fence at the Uganda university where we lived, was there, like always, one evening, on a hill behind our house. In the morning it was gone. The university security guards? Sleeping. Maybe.

Or consider the day a would-be-thief was skulking outside our home office window there in Uganda. Before I could get out of the front door, the children’s mother, Marms as we affectionately call her, was in front of me, running, running, running for the takedown.

You have to understand Marms. One Halloween long ago a neighbour boy tried to steal her little sister’s bag of candy. Even at that young age, an advocate for social justice, she went after him, hell on wheels, like Batgirl, catching the boy, pouncing, candy flying everywhere. Which is to say that if Marms had caught that Ugandan, I don’t want to think about what might have unfolded.

In either case – and this is the rest of the good news about getting ripped off – you can always get a column out of it.

As for the money stolen from my wallet, the children’s allowance is given for their help around the house. Some is marked for spending, some for saving, some for giving, some for investing, and some for Dards’ next writing sabbatical on the French Riviera.

But after the theft, bless their souls, the children voluntarily suggested that they’d manage this month with less.

The last note of interest about all this is that lately I’ve made new friends among some local lawyers and a judge. They’ve welcomed me into their weekly meetings, early mornings, to study and reflect on things like heaven and earth and the things we lug around in between. That stuff.

Sharing about my own backstory, one recent morning I said to them, “You know, gentlemen, at that time I could have easily met you somewhere else, not here, but on the floor of your courtroom.” As an oily thief.

But for the grace of God.

I mean, can you imagine running from Marms instead of running with her?