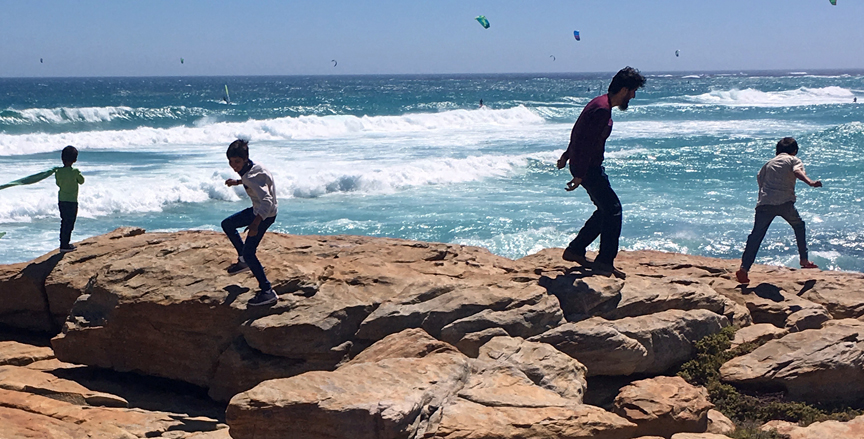 CAPE TOWN, SOUTH AFRICA – The shower is as good as any place, I suppose, to think about the end of the world.

Or maybe the horsemen of the apocalypse will ride into town while we’re all somehow gathered at the world’s oceans, dying of thirst, with (apologies to Coleridge) water, water everywhere and nothing to drink.

I’ve actually never been a big fan of doomsday prophecies. I find them distracting.

This is because there is, in fact, water everywhere but precious little to drink. Or use for the dishes, or the grass, never mind the animals or the crops. You’ve likely heard by now.

Fly into Cape Town’s airport and be refused water for tea in your travel mug. There, earnest exhortations to conserve are written floor-to-ceiling. When you later shower in your modest guest house, you’ll capture your shower water in the plastic basin that you stand in because you’ll need that water to flush your waste down the toilet.

The papers blame municipal planners for not keeping in check Cape Town’s rapid growth. This, while climate change, or at least delayed and lessened rains, haven’t replenished underground freshwater tables.

Municipal taps are now scheduled to be turned off – they call it Day Zero – in June. In the meantime, residents are being asked to live on less and less: 50 litres a day at the time of this visit. For everything. Consider a two-minute shower takes 20 litres. Three toilet flushes, another 27.

Drive past local beaches and shops and restaurants and you’ll be forgiven for missing the crisis. This region is stunning in topography, comfortable in climate and well-endowed in livability features like higher learning and health care. The world’s first heart-transplant was in Cape Town. It’s no global backwater. And yet.

My guide for the day is Salome, a happy-faced South African with toffee-brown skin. She talks freely about her heritage from 17th-century Indonesian slaves brought to South Africa by Dutch colonists. It’s Salome who also talks freely about the apocalypse. “I think we’re in the End Times,” she tells me, before elaborating on a recent region-wide day of prayer.

We drive along the picturesque shoreline to that place called Good Hope, where the salty oceans meet. There I photograph a man and some boys – maybe they’re family – casually enjoying the shoreline, virtually dancing on the rocks at the ocean’s edge. They’re almost primitive in their movements, a reminder of the strange allure we all have to water, the driving force of so much of nature.

Of course, back home in Canada there’s not much reason to think about the world’s end, or humanity’s relationship with water, or capturing water at your feet to later get rid of your own waste. Canada has plenty of freshwater.

Even globally there’s enough freshwater for the world’s seven billion people, and a couple of billion more. The problem is getting it to where it’s most needed: in swaths across Africa, the Middle East and southeast Asia.

Keep in mind that people in minority rich countries use about 10 times as much daily water as people in the majority developing world.

Consider also that about 4.5 billion people around the world now live within 50 km of a so-called impaired water source, one that’s running dry or severely polluted. It’s no surprise that scientists – 500 once gathered in Bonn about this – warn that if human mismanagement continues, then even regions rich in freshwater will suffer shortages within a generation.

Imagine that sort of Mad Max world: you and me and our children and their children and our jerry cans. Surely it’s pure fiction. Then again, I’d never imagine capturing dirty shower water to flush the toilet.

A toilet, by the way, is a luxury that two billion human beings don’t have.

This too is part of this story: all the inequities in this old world. Some of us, through no doing of our own, have been given more than others. And also more responsibility.