What, really, is in a name, after all?

What, really, is in a name, after all? 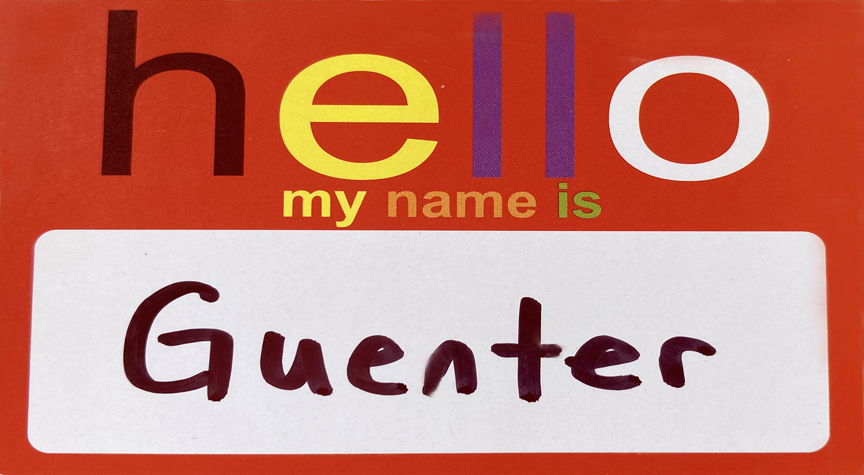 It was one of those funny things. My eldest was with me at a garage getting our car checked when she said, “Dad. Look!”

I turned to see a set of summer tires, ready for some stranger’s car. “Guenter,” the unknown owner’s name, was written large on the four tires that were stacked like a question mark.

Funny, because we’d recently buried Dad Froese, my father, Guenter, in a Kitchener cemetery. It’s not like Guenter (“Guenther” when anglicized) is the name of every kid in the playground out there. It was like a fun public announcement.  “Hey, look. Here are some “Guenter” tires. Now get going. Drive. It’s spring.”

In good weather, driving time can be quiet time, when, if you’re anything like me, you might escape the grind and, while en route somewhere, anywhere, listen to what may or may not be happening in your life. You might leave early to catch a sunrise, or even pray, although my father always said our real prayers are somehow spoken between our prayers.

This is it. A name can conjure all sorts of images. Names are like faces. We’re married to them. For better or worse, they’re what we see every morning in the mirror. “Oh, it’s you again.” Hello. Anna. Mohammed. Maria. Jose. Yes, we’re still together, stuck with our names like we’re stuck with our tired eyes and crooked noses and receding hairlines.

Our names are the starting point in how the world sees us. My mother – her name was Hannelore – and my father didn’t agree on everything, but before they went separate ways, they agreed that if their soon-to-be-born child was a boy, he’d be named Thomas.

So I’m named after history’s best-known doubter. But the unsurprising truth is that a shot of healthy skepticism, especially in this line of work, isn’t a bad thing. “Comfort the afflicted and afflict the comfortable,” is that old newspaper adage. All the better if, while doing such comforting and afflicting, you’re the namesake of someone discerning.

None of this came to mind when I was a boy bouncing around in the back of my father’s old Pontiac Parisienne, a purple boat of a car. It was eventually replaced by a red Cutlass Supreme, a convertible that made these hair-in-the-wind days the best time of year.

The point is, those “Guenter” tires? What are the odds?

Not to make more of names than we should. Look at otherwise nameless Tank Man. He’s the courageous Chinese man who stood in front of – and stopped – that row of tanks in Tiananmen Square. One nameless man standing his ground, remembered especially this weekend because of China’s violent crackdown on the Tiananmen protest, this day, June 4, in 1989.

Whatever name under the sun you may happen to have, it’s not the worst thing to imagine that in the hereafter, like your other defining features, your name might be rebirthed and regifted to you in some unexpected way, a way that you’d never fathom. Who knows?

One thing I know is that pictures of cherubs and harps and fluffy clouds typically imagined for the afterlife are horribly uninspiring. It’s better to go with hammers and saws to convey the building of the kingdom of heaven, that long tomorrow, in a more vivid and tangible, if not mysterious, way.

And those streets with no name? I’m thinking that some very cool wheels will still be needed for them.