Yemen can’t wait (and other thoughts on peace)

Yemen can’t wait (and other thoughts on peace) 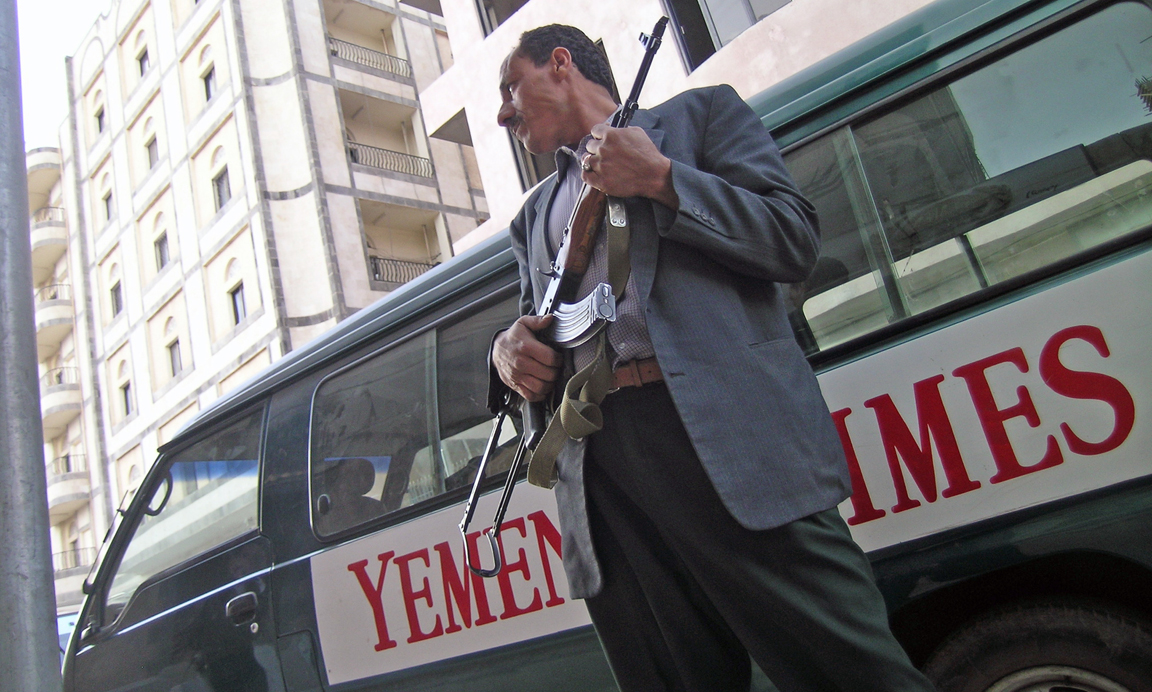 With a semi-automatic in-hand is former Yemen Times security guard Ahmed Murshid, shown in this 2004 photo.

Once I stopped riding my bike to work because I feared I’d be shot dead. It was an old blue Norco. I’d pedal it to the newsroom of the Yemen Times, in Sana’a, Yemen’s capital.

This wasn’t long after the Twin Towers fell on 9/11. More so, it was just after three American medical missionaries, friends, were murdered in a hospital by an Islamic extremist. My wife, working with needy Yemeni women, narrowly escaped being there.

A leading Yemeni politician was also shot dead. Apparently a hit-list remained that included journalists. So I stopped riding my bike to the Times, a fiercely independent English paper.

There, at the newspaper’s gate, a guard with his old semi-automatic would always greet me with a smile and kind Arabic words. But even when I rolled in with a car, my fears continued. I imagined the car blowing up.

It was, relatively, a golden time of peace in Yemen, with north and south united. Even so, I carried my fears around. This, until a few years later, when my family left for other overseas work and I could live with new fears.

Now Yemen is identified as the worst place on earth to be a child. About 10,000 Yemenis have perished in Yemen’s civil war since 2015. Millions more feel abandoned by a world more interested in politics and profit.

The Saudi Arabian alliance – backed by the U.S, the U.K. and implicitly, Canada (remember we sell the Saudis armoured vehicles and buy about $10 million of Saudi oil daily) – has been ruthless in trying to purge Houthi rebels from Yemen. Imagine 18,000 Saudi airstrikes with enough bombs hitting peaceful weddings and funerals and schools and hospitals and homes.

In these dying days of 2018 this is what comes to mind: dead Yemeni children and bicycle rides and a security guard whose name I forgot long ago. The Yemen Times, by the way, after 23 years, let everyone go and closed its doors in 2014. It had received certain threats.

Its former publisher, Walid al-Saqaf, is now a senior professor in Sweden. We recently talked about it all, including the errant Saudi bomb that killed two in his family. And we talked of better days and friendship, that season in Sana’a that we’d shared.

“Ahmed,” he then told me.  “The name of the guard you remember is Ahmed Murshid.” Yes. Of course. Thank you. We talked more. And I could hear Walid’s heart breaking anew.

Two days later, at the Hamilton Convention Centre, several hundred community leaders and peace activists and young people, lots of young people, gathered to reflect on peace. Our human and deep, God-given longing for peace. Our shared belief that food, shelter and security is a basic human right for anyone. Anywhere.

Which is to say that this event, the annual Peace Medal Breakfast of the YMCA of Hamilton / Burlington / Brantford, isn’t so removed from a seemingly far-flung place like Yemen. The world isn’t that big. This gathering is a powerful reminder of this. The event is vital. In a way, it’s beautiful. Organizers and sponsors – you know who you are – can be applauded.

Hamiltonians making a difference locally were honoured. Peace, after all, starts with anyone, with you, or anyone else who will let their heart be broken and act for reconciliation.

Of course, reconciliation in Canada is somewhat vogue these days. “It’s sexy,” is how Max FineDay, from the Sweetgrass First Nation in Saskatchewan, put it. He spoke at the event about both progress made and work still needed in Canada’s relationship with its indigenous people.

That doesn’t mean you have to run (or ride your bike) into a burning theatre when everyone else is running out. But take a step. Check out #Yemencantwait. Tell your MP and Ottawa that the world’s vulnerable children deserve better.  Or walk down some needy street in Hamilton and see if your heart won’t break.